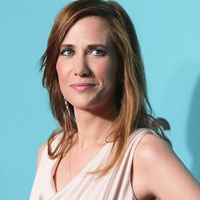 Here at HairColorCode HQ we’re massive fans of Kristen Wiig – her outgoing personality, the fact that she’s a naturally funny lady, and of course her willingness to experiment with her hair color, all add up to mean that she’s our new gal pal crush.

For those of you who aren’t familiar with Kristen; she is an American actress, comedienne and writer currently starring as a cast member of Saturday Night Live. Kristen has appeared in numerous films, including Adventureland, Paul, MacGruber and Flight of the Concords and also voiced characters for How to Train Your Dragon and Looney Tunes.

She’s probably best known for her 2011 film Bridesmaids, billed as the female version of The Hangover, which she co-wrote and starred in. Bridesmaids earned her two prestigious nominations; Golden Globe for Best Actress and Academy Award for Best Original Screenplay.

The style behind the laughs 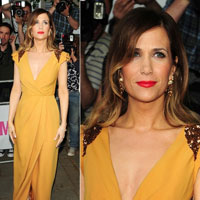 Kristen doesn’t just express herself through her comedic roles; she also likes to mix it up with her style and is regularly seen on the red carpet rocking a creative, bold look, such as a bright red lip color, stunning cut-out dresses and fierce accessories.

Although she’s probably best known as a blonde with short, tumbling waves, like her character in Bridesmaids, Kristen is actually a hair color chameleon – she’s rocked deep dark brown, ombre-hued hair and a lovely mahogany tone, as well as golden blonde beachy locks. 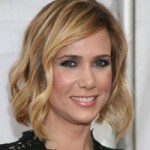 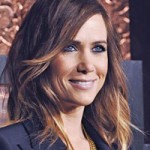 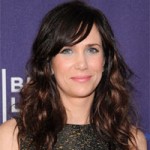 Kristen has been blonde for most of her acting career and has switched between light blonde highlights to golden blonde sun-kissed waves multiple times.

She’s also rocked a light brown hue with golden blonde panels – this is one lady who is not afraid of experimenting with foils!

In summer 2011, she showcased ombre locks, sporting a deep rich chestnut color at the roots and through the mid-lengths of her hair, with light blonde tips.

She kept up this style to promote Bridesmaids during the summer and actually persuaded me to follow suit with ombre locks of my own!

Early 2012 saw another change for Kristen as she ditched the ombre for a rich, auburn-toned mahogany shade. Since then, she’s swapped from auburn to a brown so dark it’s almost black.

Kristen is lucky enough to suit a wide range of hair colors, from blonde to auburn to brown, and we’ve yet to see her with a hair don’t.

Kristen is a true chameleon that most definitely knows how to make a statement with her hair and her style – and that’s why we love her!