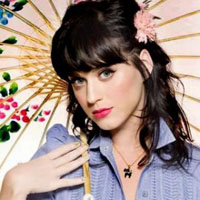 It seems like the 21st century has developed a new breed of diva to take the world by storm; bold, confident, fun and sexy young women who know what they want and don’t let anybody get in their way.

With this new breed comes new attitude, and more importantly new style, and who else symbolizes this flock of starlets better than Katy Perry.

Katy Perry, real name Katheryn Elizabeth Hudson, is an American singer-songwriter who was born in Santa Barbara, California in 1984 and raised by Christian pastor parents. She’s pursued a career in music since a very young age and has now released two studio albums with a huge number of record sales. Perry has a huge personality and a fantastic sense of style to match, with a real distinctive look.

From gospel singer to international star

Katy’s first album was a self-titled gospel album in 2001 under her birth name, Katy Hudson which without mincing my words, failed. She then spent some time recording tracks for her mainstream debut album, ‘One of the Boys’ under her new stage name, Katy Perry. She released a digital EP entitled ‘Ur So Gay’ in 2007, which didn’t really attract much attention.

Her debut mainstream single ‘I Kissed A Girl’ was released in 2008 amid much controversy from gay and lesbian equal rights groups, but she then went onto to go platinum with her debut album, ‘One of the Boys’, whilst ‘I Kissed A Girl’ and her subsequent single ‘Hot N Cold’ went multi-platinum.

Her second studio album, Teenage Dream, produced five Hot 100 number ones, making it only the second album in history to do so after Michael Jackson’s ‘Bad’. Her single ‘E.T’ also broke the world record for being the first single in history to spend 52 consecutive weeks in the top ten of the Billboard charts.

There’s no doubt about it – this record-breaking singer is one of our favorite pop-stars here at Hair Color Code, both for her rockin’ sense of style and her catchy tunes. Let’s take a look back at Perry’s hair color history.

When she first came onto our radar back in 2008 with her raunchy debut single, she had shoulder length dark brown hair – although we’ve reason to believe she’s a natural red-head. Husband Russell Brand sent a rather naughty tweet about his wife, saying ‘You’re a hacker, a bad wife, and your natural hair color is ginger. There’s not enough dye in the world to rinse away the lie’.

As she began to release more singles, a firm sense of style was established – fun, playful, 50’s style pin-up girl. To match that sense of style, she dyed her hair jet black and kept it that way for a good few years, changing up the style occasionally from long, tumbling movie-star waves to a shorter, Marilyn Monroe-style do. She’s also sported a chin-length bob with a full fringe as well as a long, wavy style with a short Cleopatra-style fringe.

Katy Perry isn’t one to shy away from color however – for her videos and various music award appearances Katy has literally sported hair that is every color of the rainbow. With the help of a few wigs, we’ve seen Katy with green hair, indigo hair, violet hair, red hair, orange hair, blue hair – all in flouncy, bouncy styles.

More recently, Perry moved away from her usual signature black hair style and we spotted her promoting her fragrance Purr in Toronto with a surprisingly pretty red-haired style. It seems Perry was in a transition from black to blonde and had to stay red for a few weeks before she bleached her hair entirely, tweeting to her fans, ‘I’ll get to my secret color(s) soon! #patience’.

She then finished the bleaching process and went to what we can assume is close to her natural hair color, a strawberry blonde shade. But she didn’t keep that for long and now she’s rocking a cherry-pink hue that was perfect for summer.

We all know and love Katy Perry for being unafraid to take risks with her style and hair color, so keep your eyes peeled to see which shade she rocks next!