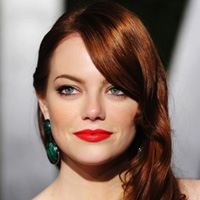 Make way, noobs – there’s a new geek muse in town. Emma Stone may not have set out to conquer geek hearts everywhere when she moved from Arizona to LA at fifteen, but starring in cult hits Superbad and Zombieland has cemented her popularity as quirky actress du jour.

More geek chick cred? Emma recently starred in Easy A – an adaptation of Nathaniel Hawthorne’s Scarlet Letter – and is slated to play Gwen Stacy in the upcoming Spiderman reboot.

But whatever role she plays, Emma Stone has managed to capture the public’s heart and imagination. There’s just something so sweet, unique and down-to-earth about this young girl, so much that she’s a breath of fresh air in a sea of cookie-cutter ingénues. Forget boring! Emma Stone’s dizzying array of ever-changing hair color alone is enough to send everyone into a tizzy. 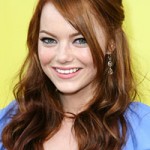 Though Emma usually changes her hair color to suit filming requirements, it’s undeniable that the girl understands the power of a good dye job. Here’s something a lot of people probably don’t know about Emma Stone – the popular redhead is actually *drum roll please* a natural blonde! Her first LA agent sent her nothing but “cheerleader roles”, something that fifteen-year-old didn’t exactly relish. Young Emma decided to her hair dark brown and serendipitously got her first serious role shortly after. How’s that for powerful hair color?

Since then, Emma has dyed her hair different shades for various roles. For her breakout role as Jules in Superbad, director Judd Appatow suggested dyeing her hair red, inadvertently creating her iconic image as the ginger everyone has come to know and love. For her role as a bassist in The Rocker, Emma took on a dark golden blonde but eventually resumed her redheaded ways for The House Bunny. For horror-comedy Zombieland, Emma sported a deep brunette that offset her bright green eyes wonderfully. 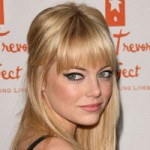 But the most shocking change of all came when the young actress stepped out with platinum blonde locks for her role as Gwen Stacy in the latest Spiderman reboot. Though naturally blonde, people assumed that Emma had finally been consumed by Hollywood and ended up dyeing her hair light blonde to fit in with the rest of the business’s young actresses. Fans of the “ginger” look calmed down, though, after Emma returned to her (albeit fake) redhead roots for her latest film The Help. Bonus: her usually straight hair has been transformed into gorgeous curls! 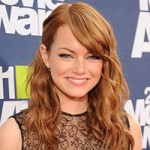 Off the set, Emma has ditched the blondish red curls for a fierier shade reminiscent of her Superbad days. What color she’ll choose next, no one knows, but for now, Emma Stone’s got our hearts on fire – burning as bright as her beautiful red hair.

Although Emma isn’t afraid to change her hair color, we all tend to remember her for her amazing trademark red style (right). To achieve this look, try Clairol Natural Instincts Golden Shimmer Hair Color, Golden Sienna.