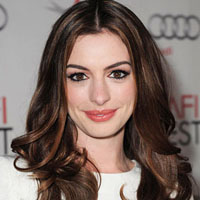 Since her move into popular films, Anne Hathaway has been firmly on our radar here at Hair Color Code as an elegant actress with bags of charming personality and a stunning sense of style. Let’s look back at the meteoric rise, and out of this world hair, of the lovely Miss Hathaway.

The career so far

Born Anne Jacqueline Hathaway in 1982, she started her career on the stage before appearing in a few small television roles, including the 1999 television series ’Get Real’. Anne honed her trade in a number of family-orientated films (and who doesn’t love ‘The Princess Diaries’) before hitting the big time with a series of box-office smashes including ‘Bride Wars’ with Kate Hudson and ‘Alice in Wonderland’ with Johnny Depp and Helena Bonham-Carter.

A native New Yorker, Anne was born in Brooklyn to a lawyer and an actress, her mother Kathleen Ann, who was the inspiration behind Anne’s career choice. She has two brothers and was raised Catholic with ‘really strong values’. However, she turned her back on religion at the age of 15 after her elder brother Michael came out as gay, deciding that she couldn’t be part of a religion that condemned her brother’s sexual orientation.

Anne attended a creative school in New York where she participated in numerous plays and school shows – in fact, her high school performance as Winnifred in ‘Once Upon a Mattress’ earned her a nomination for Best Performance by a High School Actress by Paper Mill Playhouse. During her high school years, she was in many plays at the aforementioned Playhouse including ‘Jane Eyre’ and ‘Gigi’. After high school, she became the first teenager to be admitted into the Barrow Group Theater Company’s program where she trained as a stage actress. Three days after a performance in the choir at Carnegie Hall, she was cast in the TV show ‘Get Real’ where her acting career really took off.

When Anne first appeared on our television screens she sported deep chestnut brown locks, parted to the side and down to her shoulder. It was a very simple look and probably reflected her young age as it was unfussy and very easy to maintain. For her on-screen debut in ‘The Princess Diaries’ her hair was longer with a mahogany tone which was styled to be big, frizzy and wild at the start of the film and sleek and elegant at the end of the film. In her second film, ‘The Other Side of Heaven’, she sported a similar style, parted to one side, but her hair was a lighter brown tone although still with reddish undertones.

Anne’s hair color has remained pretty constant since her big screen debut, occasionally getting a little lighter and redder, occasionally getting slightly darker (now there‘s a girl who understands the ‘no more than 3 shades from your natural color’ rule). With her luminescent skin tone Anne can carry off both light and dark shades, but here at Hair Color Code we love her darker hair as it makes her look like a particularly gorgeous porcelain doll. Although Anne doesn’t tend to go for dramatic color changes she has changed the style up a little bit, for example in 2008 she had a modern bob which she wore both shiny and straight and loose and textured. The bob was a look we’ve never seen on Anne before and it really suited her, making her look more current and edgy.

In 2010, we saw Anne with perhaps her prettiest hair style and color to date, a centre parting with loose, flowing waves and a few scatterings of golden coppery highlights. But in the biggest film of the year, Alice in Wonderland, we saw Anne as an icy blonde playing the Ice Queen. And surprisingly, such a drastic change suited her far more than anyone would have thought!

Anne Hathaway is definitely one of the classiest celebrities that we’ve come across at HCC and her signature hair color and style really enhance her elegant demeanour. A fantastic actress and a glamorous Hollywood style icon to boot, Anne Hathaway is sure to keep us lusting after her luscious locks for quite some time yet. 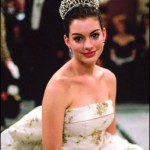 As pretty as a princess 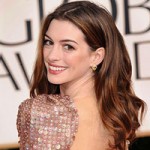 Working the highlights at the Golden Globe Awards 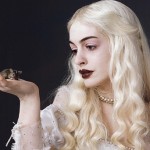 The Queen of Hollywood